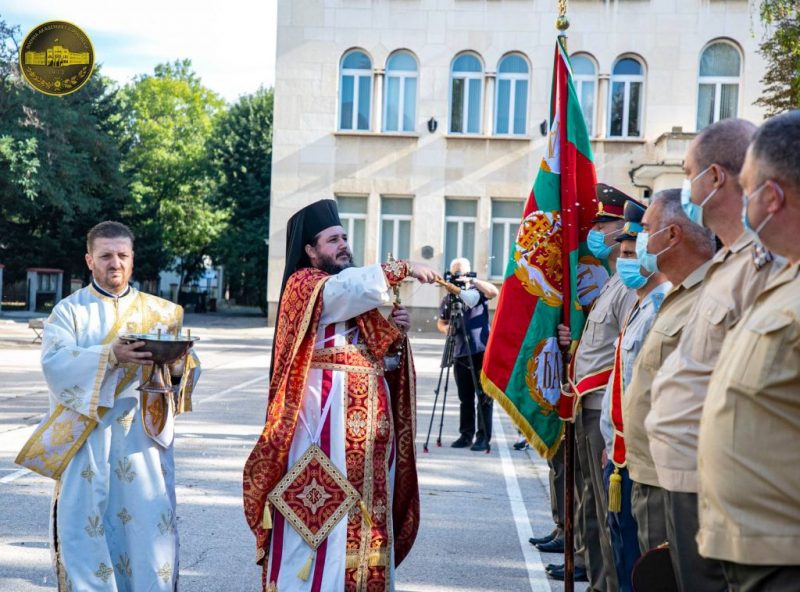 The opening ceremony for the new academic year was held on an open stage in the park of the College, where Major General Grudi Angelov, PhD, Commandant of Rakovski National Defence College, delivered a speech.

He addressed the military students and lecturers by saying that the College had been educating the leaders that the new times call for. He reminded the audience that in the past the College had already produced leaders, such as Tsar Boris III, the President of Bulgaria Gen. Rumen Radev, as well as Prime Minister Gen. Stefan Yanev; he expressed his confidence that the students would deal with the challenges together with their teachers. He noted, as an important fact that these alumni would graduate when the Defence College commemorates the 110th anniversary of the First Balkan War and celebrates the 110th anniversary of the establishment of the Defence College.

This year’s opening of the academic year for military students at the National Defence College coincides with the beginning of the transformation of our Armed Forces in accordance with the Defense Capabilities Development Programme until 2032 and the 2026 Plan adopted by the government. This became clear from the first two academic lectures, delivered by the Deputy Minister of Defence Plamen Yordanov and the Chief of Defence – Admiral Emil Eftimov.

According to the plan, the implementation of the new functional structure of the Armed Forces begins today with the changes in the Joint Forces Command (JFC) and the establishment of two commands —  Logistics Support and Communication and Information Support and Cyber Defence. Moreover, in the words of Admiral Eftimov: ”As of today, the Logistics Support Command and its Commander, Brigadier General Todor Todorov, are taking part in an operation, i.e. participation of our contingent in the non-combat NATO operation on the territory of Kosovo, aimed at dealing with the issue of the refugees from Afghanistan”.

“The defence system of our country today has an updated strategic conceptual and doctrinal base”, said Deputy Minister Yordanov. He also said that a new National Defence Strategy was yet to be developed. At the same time, he expressed his expectation for the existence of sufficient political will on the part of the future elected government, in order for it to provide the resources needed for defence, i.e. for the implementation of the National Plan for increasing the defence expenditures to 2% of the GDP of the Republic of Bulgaria by 2024. He stated that there was no disagreement between the political and military leadership on the priorities of the Armed Forces.

The development, approval, resource provision and consistent implementation of the “Investment Program Plan 2032” are forthcoming. The launch of the project for acquisition of armored combat vehicles for the Land Forces is a priority.

During the first stage (2021 – 2022) the main activities will be focused on: introducing the new functional structure of the Armed Forces; adapting the architecture of the command structure at the strategic and operational levels; reorganizing the Armed Forces at the operational and tactical levels; staffing the understrength high-readiness military formations, the declared structures, as well asthose subject to certification, as a contribution to the collective defence of NATO in accordance with the adopted Capabilities Objectives; initiating / implementing investment projects; utilizing surplus ammunition and divesting the Armed Forces of unnecessary infrastructure and military property that is no longer needed.

During the second stage (2023 – 2024) the main activities will be focused on: reorganizing the Armed Forces at the tactical level; filling the shortage of personnel in high-readiness military formations; accelerating the utilization of surplus ammunition and divesting the Armed Forces of unnecessary infrastructure and military property that is no longer needed.

During the third stage (2025 – 2026) the main activities will be focused on: achieving the necessary operational capabilities of the formations at the operational level; reorganizing the Armed Forces; dealing with the shortage of personnel in the military formations of the Armed Forces; continuing the modernization, building up new and developing existing capabilities; completing the process of utilization of surplus ammunition and divesting the Armed Forces of unnecessary infrastructure and military property that is no longer needed.

The congratulatory address of President Gen. Rumen Radev was read by his Security and Defence Adviser, Stefan Godzhevargov.

Congratulatory addresses were sent by: Ivan Mitev, Speaker of the National Assembly, the commanders of the JFC, the branches of Armed Forces and military formations, military and civilian educational institutions, ambassadors and military attachés, military-patriotic organizations, district governors, mayors and many other friends of the Defence College.

In Academic Year 2021-2022, the Defence College welcomes a total of 102 students. Of these, 89 students will be trained in “Organization and Management of the Military Formations at the Operational Level” master’s degree programme, with seven specializations in the professional field of “Military Art”, full-time and part-time training at the Command and Staff Faculty.

This year, 13 officers, including 2 officers-students from the Republic of North Macedonia, will be trained at the National Security and Defence Faculty in “Strategic Management of Defence and the Armed Forces”.

The solemn ceremony was held in strict compliance with all anti-epidemic measures.