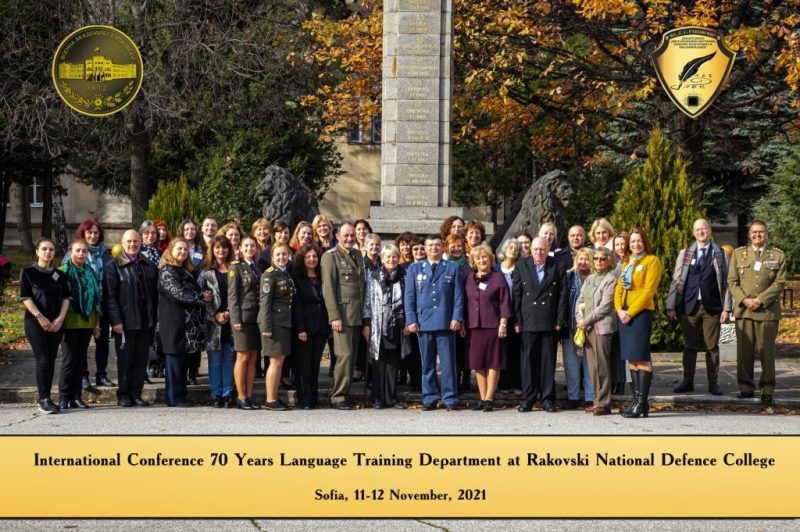 On November 11, 2021, the Language Training Department at Rakovski National Defence College celebrated its 70th anniversary. The celebration was held in a hybrid format in compliance with all anti-epidemic measures, and some of the participants and guests joined through the MS Teams online platform.

Assoc. Prof. Dr. Valentina Georgieva, Head of the Department, presented the department with its goals and tasks and outlined its current achievements and challenges. She showed the newly published bilingual book „70 years of the Language Training Department” (in Bulgarian and English). The book is the result of research work and the joint efforts of the lecturers of the department to summarize the experience and to present the rich traditions of the department in teaching foreign languages to the servicemen.

The most significant event during the anniversary celebrations was the International Conference entitled „Interweaving Traditional Paradigms and Innovative Practices in Language Education”. 34 scientific papers were presented in five panels: Innovative practices in foregn language teaching; Language for Specific Purposes: theory, methodology and testing; E-language learning; Intercultural aspects of language teaching; The traditional language paradigms in the 21st century. 38 authors presented thought provoking and significant research in the three working languages of the conference – Bulgarian, English and Russian, which is included in the collection of peer-reviewed papers from the International Scientific Conference uploaded on the webpage of Rakovski National Defence College:

The anniversary will be remembered by all guests and presenters thanks to the great organization, enthusiastic participants from different countries and the wonderful atmosphere of constructive debate and shared experience.

Foreign language training at Rakovski National Defence College started with the establishment of the military institution in 1912, but the year 2021 marks the 70th anniversary of the department which was included in the structure of the institution as a separate entity dealing with foreign language education of officers.