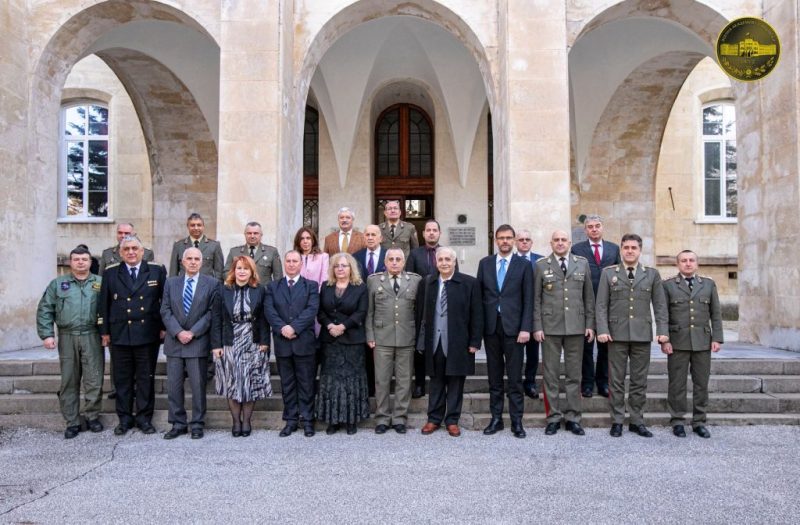 On 13th January 2022 in the Royal Chambers complex of Rakovski National Defence College a Partnership Agreement was signed for the implementation of the Security and Defence National Scienctific Programme (henceforth ‘the Programme’) adopted by Decision of the Council of Ministers № 731 of 21.10.2021. Parties to the Agreement are:  Professor Tsvetan Lazarov National Institute of Defence, Rakovski National Defence College, the Center for National Security and Defence Research at the Bulgarian Academy of Sciences, the University of National and World Economy, The University of Library Studies and Information Technologies, the Academy of the Ministry of Internal Affairs, Nikola Vaptsarov Naval Academy, Vasil Levski National Military University, and Georgi Benkovski Bulgarian Air Force Academy.

The Director of Professor Tsvetan Lazarov National Institute of Defence, Col. Assoc. Prof. DSc Eng. Borislav Genov, is the Programme Coordinator and Chairman of the Executive Board. The Parties agreed to implement the activities described in the Programme. The programme was created in implementation of the National Strategy for Development of Scientific Research 2017 – 2030 in order to increase the national scientific capacity in the field of security and defence. It will unite the efforts of scientific organisations, universities and innovative business organisations in the country.

The forum was opened by Maj. Gen. Grudi Angelov, PhD, Commandant of Rakovski National Defence College, who welcomed those present and concluded with the words: Let us wish to be alive and healthy, to have a strong will, cheerful spirit and optimism for the future. Let us carry the spirit of winners and never give in to difficulties!

The participants in the forum were greeted by an Address from Rumen Radev, President of the Republic of Bulgaria and Commander-in-Chief of the Armed Forces, which reads: “Congratulating you once again on the establishment of the Consortium, I wish you above all good health, good spirits and optimism. May scientific curiosity and the spirit of discovery always be with you! Let your work be efficient and results – indisputable!”

Deputy Minister of Defence Alexander Petkov greeted the participants on behalf of the Minister of Defence Stefan Yanev: I welcome the establishment of the Consortium for the implementation of the Security and Defence National Scienctific Programme and hope that it will contribute to achieving real scientific results, giving a competitive advantage to the Republic of Bulgaria in specific segments of security, cybersecurity and the defence of Bulgaria, EU and NATO .